The recent years positive pathway was still place in france at the end of February. Year to Date February sales were 40.463, up 9.8%.

Unfortunately the risk correlated to the development of Covid19 in the country has been underestimated by the government and first measures had been taken only in Mid-March with the deep risk that contagious will spread over the country in large-scale.

As the other European countries, the Government announced to be ready do whatever its take to fight against the negative economic impact of the activity block, while specific measures need to be approved.

In our scenario, the motorcycles market will be heavy hit in the first half with sales declining 51.5% in this period, before to recover progressively from July. Full Year sales are projected at 170.000 units, down 44.8%, before to recover in the next year, when a level of 245.000 units could be recovered.

In 2019, Peugeot was outstanding in a fast growing market

Since years French market is the largest in  Europe. In the 2019 France was ahead of  Italy, Spain, Germany and Turkey while at Global level the market is only the 20th, ahead of Italy and behind Peru (19th), Nigeria (18th) and Japan (17th).

In the period 2017-2018 the market was affected by the introduction of new European limits for emissions, which has been  the main reason for the last year decline is in the new European emission regulation, the stage euro 4, introduced in January 2018, forcing the manufacturer to register with the end of December all euro 3 models is stock. The effect for a bulk of self-registrations in the Q4 2017 which pushed the year at the best level of this decade, 285.027 units, heavily penalizing the first half 2018 figures, with 2018 figures declining at 266.656 (-6.4%).

According to data released by the French Minister of Transportations, in the 2019 the demand for two-wheeler vehicles was outstanding with sales boomed 15.7% at 308.422, the highest level since 2012.

The 50cc scooter segment reported the strongest increase, up 24.9% and represents today the 28.2% of the market, while scooter over 50cc segment increased 5.9% and Motorcycles segment 11.7%, representing the 41.7% of the total.

The French market is really fragmented with 388 different brands which have registered at least one model in the 2019.

In third place Piaggio, leader among the scooter specialist, with 26.260 sales (+3.1%) ahead of Peugeot which scored an outstanding year with 20.552 sales (+40.7%) and with one of the best growing performance of the year.

Among the fastest growing brands there are Aprilia (+59%) and the Chinese electric maker NIU (+242%). 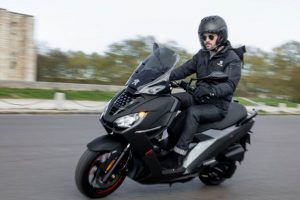